Continued from – “Why Hello Again Tiger”

“Sometimes it’s just time to go!” said Rob Lewis, after watching for months as Dad ran between the truck and the dock, the dock and the barge, the barge and the boat. An unexpected deck replacement two months before the departure date, the mast out, a haul out, and various other hours of glueing, planing, and chasing leaks…at some point it was just time to pack the tools on the boat, and set off, leaving some projects to be done at sea.

So that’s what we did. Midday July 9, we loaded last minute supplies, collected our fourth crew member, and cranked the motor to plow through the muddy marina and out into the great Hudson River, heading south. 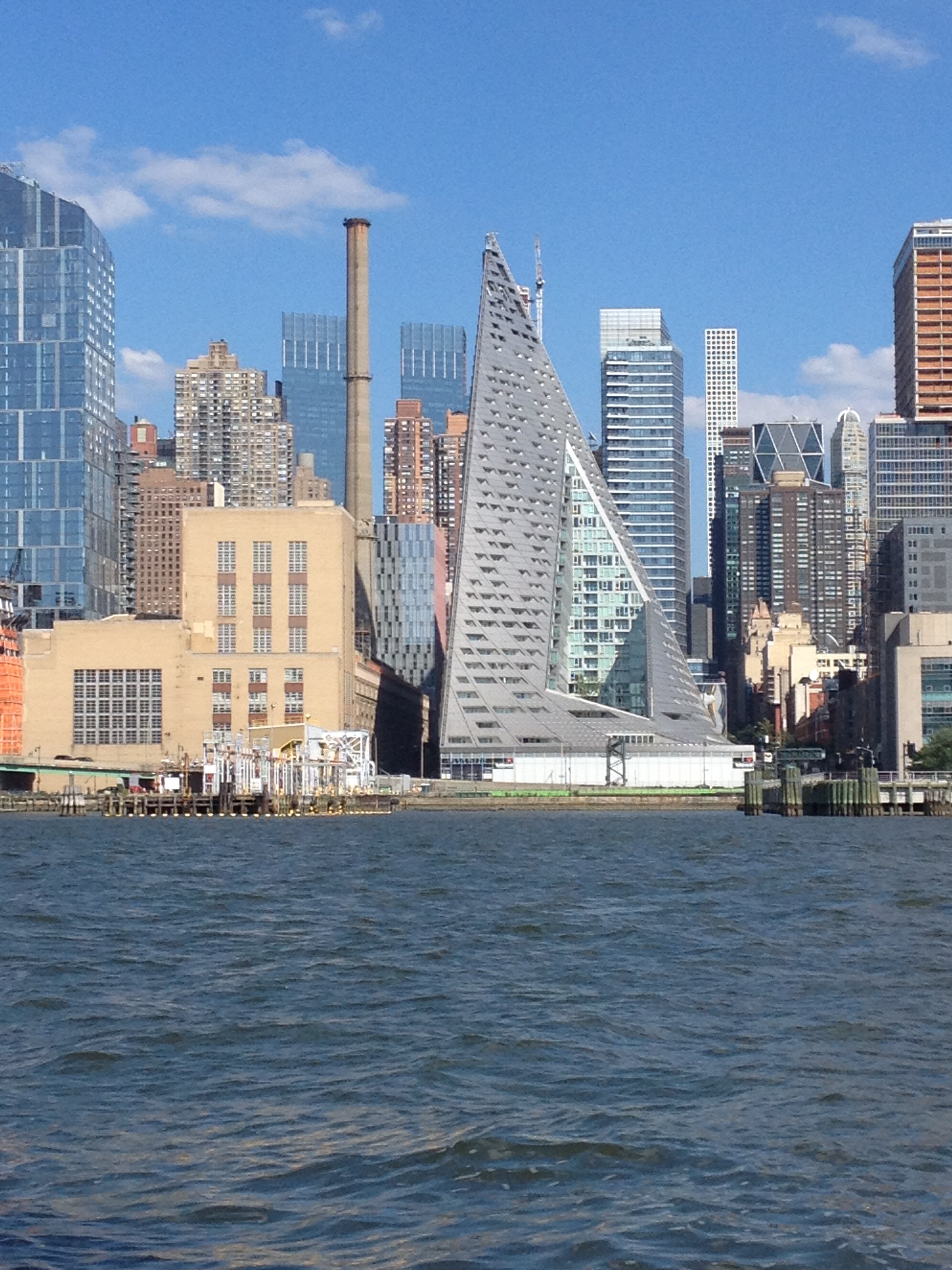 The New York skyline is especially majestic from the water, skyscrapers and ferry terminals, new and old butting butts on the crowded streets. We motor sailed the whole way down, riding the tides and currents that pulse in and out from the ocean, boosting or stealing your speed. Our mainsail raised helped stabilize the boat and catch any wind that might cross at the right angle. 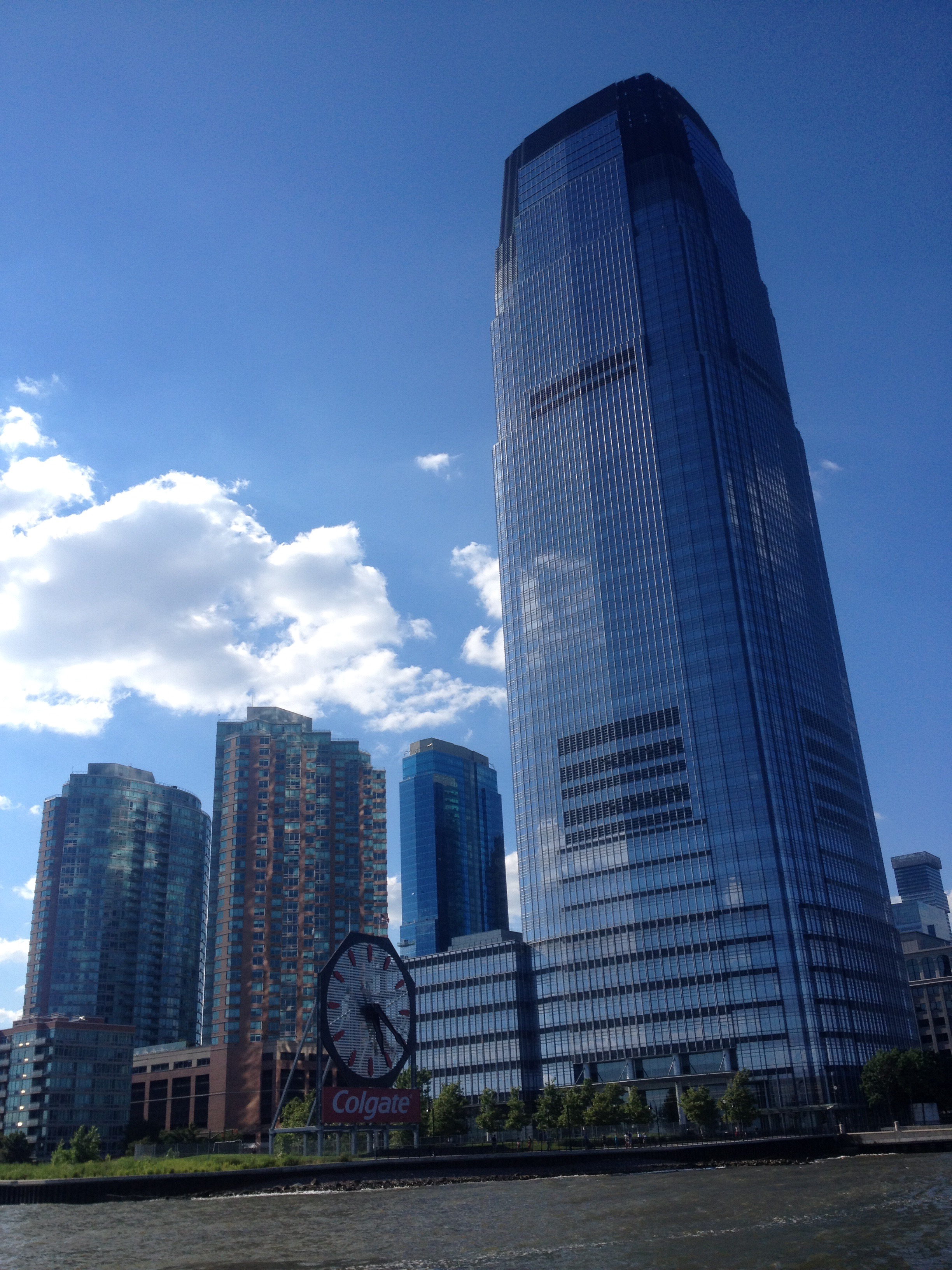 Then off and around the bend into the East River, which would spit us into the Long Island sound. Just me and three born-and-raised New Yorkers. Before long childhood memories started to flow. Stories of sailing this river, and all the shenanigans that came with it. New Yorkers are never short on eccentric stories.

Our mast  tickled the underbellies of gigantic bridges, linking the various islands of the great wet city. The Tappen Zee Bridge, the George Washington, Brooklyn Bridge, Manhattan, Williamsburg, Queesnborough. As we passed far below the thundering traffic, I asked which was which of my native New Yorkers, receiving in return some history, some toll information, and opinions on the most recent rebuild or renovation. The sun set behind the skyline as we left the city behind. 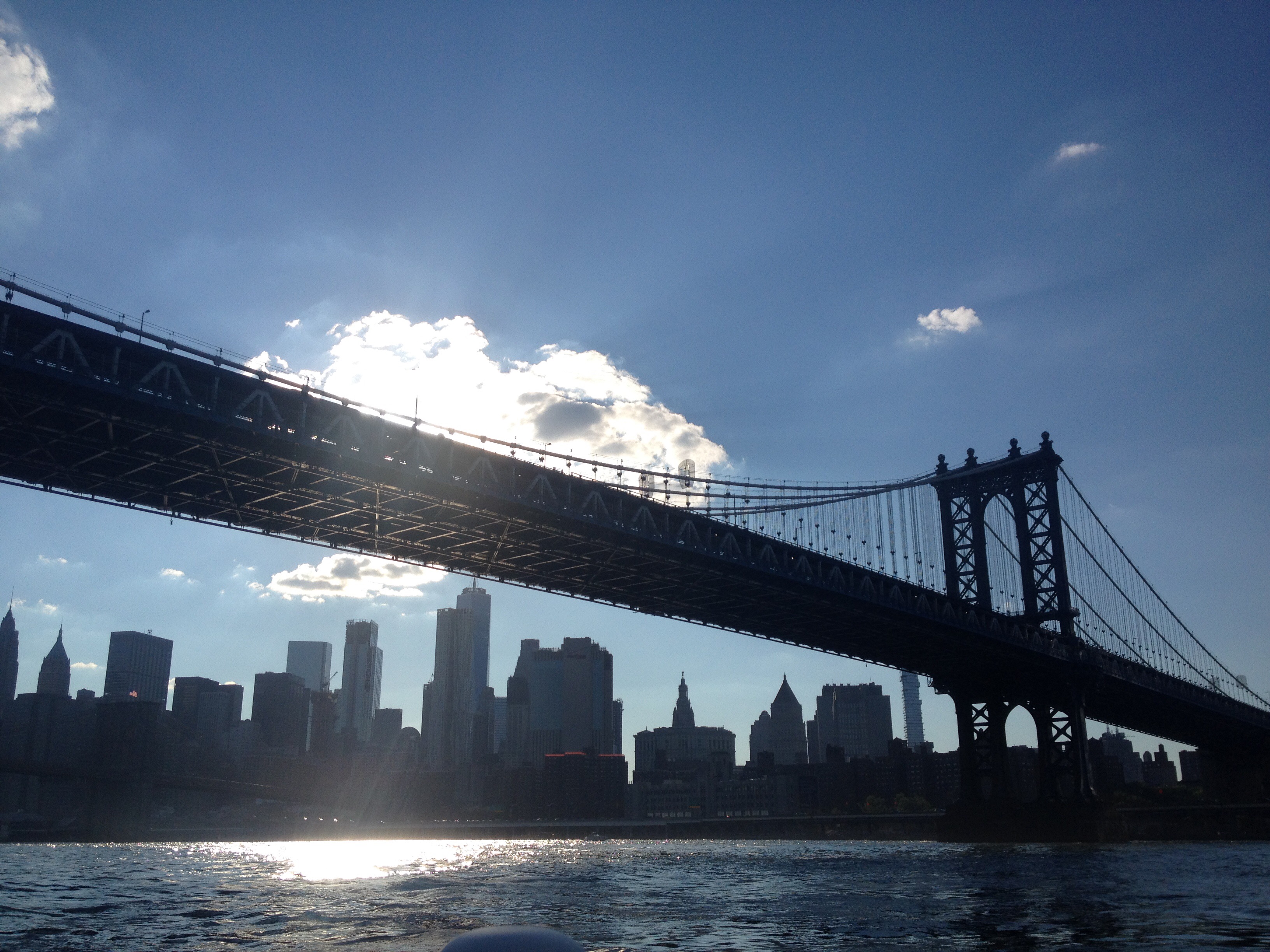 We would spend the entire night passing Long Island, aptly named. A barrier island much like my familiar Outer banks of North Carolina. In fact, my father said, the sand of the OBX rode ocean currents down from Long Island, which itself was plowed and forgotten in New York by glaciers of the last ice age.

I took watch from 8-11pm. There was a sense of calm setting in. There were still some projects to do as we went, but finally all the required tools were contained in our 37′ world, and finally that world was doing what it was meant to be doing, and moving. As I settled into steering, watching for the flashing buoys of land and rocks, a full, fat, orange moon lumbered up over the island. A breeze settled in, and I slowly lowered the engine throttle, then cut it off. Silence fell for the first time. We were sailing. The solid boat responded to the pull of wind, the sway of water, and I responded accordingly with the wooden wheel. The moon shone off the mainsail and I felt happy…

Sunrise. I awoke to the engine rumbling. At some point in the night the wind had died again. I looked out, expecting my father at the helm, but found Peter instead, and was confused. So much happens while you sleep on a boat, three whole cycles of people waking and trading watch. I love to be awake while others sleep, hate to sleep while others are awake. I always feel like I want to piece the night back together, fill in what I missed.

We motored the morning, still passing the end of Long Island, Montauk. Finally out into the Great South Bay, Connecticut and Massachusetts to the North, the Atlantic Ocean to the South, and we set sail. The boat’s motions became more erratic, and my unaccustomed body became a little uneasy, a little sick. Laying down seemed to help. So I rested and half slept until my watch.

There is a little canal at the end of Buzzard’s Bay that cuts through to Cape Cod Bay, the Cape Cod Canal. The only problem was that if we got there as the tide was rushing out, even with our engine we’d barely be able to push through. We would have to moor just outside and wait until 6am to catch the current rushing in.

Dana and I had switched watches, because the nights are hard for her eyes, and because I like the solitude of the witching hour. A good trade. So at 11pm I came up, just in time to pass up the busy Buzzard’s Bay channel. Red flashing bouys marked the right and green ones the left, and I steered nervously clear of big tug boats lit white and red and green. Dad stayed awake to help point out beacons and shallow spots on the chart. All the lights seemed to pile on top of each other for my tired eyes, and as the current flowing out met the wind waves coming in, it kicked up a chop which I curved and surfed as best I could to keep the boat from rolling uncomfortably. Not a relaxing watch, trial by little fire. But then, as instantly as a passing wave, we tucked in close to land and all was still. The water glassed and slept, the wind held her breathe, and the warmth from the land hit us humid and comforting.

After just one day at sea, the smell of land was surprising and intoxicating. I immediately recognized the sharp musk of maritime forest and flashed back to kayaking marshy coastlines in the Outer Banks. Earlier that day, in the customary polite acquainting before the true test of spending a month together within 400 square feet, Peter and I had chatted about his daughter’s study of chemistry and olfaction (smell and its close link to memory). I inhaled Pine and Live Oak and Wax Myrtle and dove further back still, to the two years we lived in North Carolina in elementary school. And the first time I returned to NC as an adult, feeling surprisingly at home with the smells, just as I did now.

Lightening flashed to the West and a rush of rich, humid air hit us. Is it true that soil bacteria put off an odor right before the rain? I remember that smell from thunderstorms in the tropics. A place will stay with you, in hidden corners of the mind (probably that corner right next to your olfactory nerve.)

We motored into the peaceful anchorage and picked up a mooring ball, disturbing a squatting cormorant, who waited until the last minute to pump is way across the water. Mooring balls are one of the simple pleasures I remember from childhood, meaning a simple stop, none of the stress of setting an anchor. Just catch the line, tie it to the cleat, and trust that your boat will stay. I sat writing as everyone slept and the engine cooled off, and some bird screeched into the inky darkness from the small island nearby. I was excited to see this land in the day.

But I slept right through the morning, as we motored through the canal. A boat kid can sleep through the starting of a Diesel engine right next to her bed. By the time I woke, we were well out into the Bay, crossing to Provincetown, the very tip of Cape Cod. Another mooring ball, this one a little more stressful as we approached under sail. I learned when to release the sails in order to come up into the wind with enough speed to grab the line. Except we missed the line, and had to use the engine. So I learned when not to release the sails in order to catch the mooring.

I had forgotten that it was the middle of summer, and what these East coast beach destinations are like in July. An old town, a rich maritime history, classic houses, small sailboats in the bay, and streets packed with…shirtless, hairy men?

That is, Provincetown is a vacation destination for gay couples, and the second week of July is ¨Bear Week¨. Beaming couples strutted proud and flamboyantly liberated, while everything from T-shirts to night clubs, to themed costumes paraded down Main Street. The potent atmosphere of unchained self expression was inspirational, but ultimately very concentrated and overwhelming, and, like any sort of festival, after a couple days I was ready to head back to the quiet rhythm of the sea.

We did some last minute food shopping at the Stop & Shop up the road. One problem was that none of the advertised cab companies would answer to take us back to the boat. So Peter just set off down the road with the cart. “We’ll bring it back!” He lawyered, and we walked through town to the docks.

Just a fuel and water fill…if we could find the fuel dock through the classic New England fog. We rafted to the floating dock, now 20 feet below the pier in the classic New England low tide. There were fresh water spigots but no hoses (classic New England generosity). We filled jugs and carried them to the tanks, then turned the prow and sputtered out around the point of Cape Cod and east into the Atlantic. Next stop Ireland…or so we thought.

Continued in – “Through the Fog, Provincetown to Newfoundland”

Do you like what I'm doing. Drop me a tip! Other accepted forms of currency: hearts, likes and words of encouragement;)

Oh my mamey!
After 36 years, both my mother and I are finally learning my signals. She doesn’t need much space, but she is learning to give me mine, and I am learning to take it shamelessly. As our visit slid by, I slowly melted into her home, her rhythm. I learned again how to snuggle, reading stories to toddlers totally trusting in my arms, watching Netflix curled next to mom on the futon couch, the cat sprawled purring over our two bodies. I realized how tense I had been these last two years, building a life on my own, relaxing into no one. Independence is empowering, until it is restricting. Until strength limits flexibility.
I’m not a perfect guest.
I’m trying out being a writer in NYC😜
I used to hate how much time my mom spent in her garden. Now I get it😌
Learning to pray?

Do you like what I'm doing. Drop me a tip! Other accepted forms of currency: hearts, likes and words of encouragement;)

Oh my mamey!
After 36 years, both my mother and I are finally learning my signals. She doesn’t need much space, but she is learning to give me mine, and I am learning to take it shamelessly. As our visit slid by, I slowly melted into her home, her rhythm. I learned again how to snuggle, reading stories to toddlers totally trusting in my arms, watching Netflix curled next to mom on the futon couch, the cat sprawled purring over our two bodies. I realized how tense I had been these last two years, building a life on my own, relaxing into no one. Independence is empowering, until it is restricting. Until strength limits flexibility.
I’m not a perfect guest.
I’m trying out being a writer in NYC😜
I used to hate how much time my mom spent in her garden. Now I get it😌
Learning to pray?
I love her fiction.
Everything is perfect from such great heights 🌊
Touchdown:)
Loading Comments...
%d bloggers like this: